Part 1 – It All Started in 1924…
The date was February 19, 1924. After a fire destroyed Ruth Hall’s home 37-villagers vowed to never go without fire protection again. They met at the Harmony Chapel and organized a community club and fire department. The following officers were elected: Harry Staples, President; John Fogarty, Vice-President; Adah Hawkins, Treasurer; Gladys Hall, Secretary; and Howard Hall, Marshal.

Now that they were organized, this group went to work fundraising. The first event they held was a Ham and Bean Supper, at the Twin Elms Farm, on March 3, 1924. This event raised $494.32. Little did they know at the time that this event would be held every year for nearly the next twenty years.

On March 10, 1924 the organization met again and officially passed a motion to name the department the Harmony Fire Department and Improvement Association. They also agreed to set a one dollar membership fee and dues of a quarter monthly.

Now that they had a name the department needed equipment. They had no truck, hose or other firefighting equipment at all. So a committee was formed to purchase these things.

The treasury continued to grow. In June there was $888.12 in it, which didn’t come close to the amount needed for a truck. The decision was made to incorporate, which happened on June 27, 1924, after a five dollar incorporation fee was paid.

Part 2 – 1925: The First Fire Station
By mid-March of the year 1925 the Association acquired its first pieces of equipment. This consisted of twelve hand-operated fire extinguishers. Although state-of-the-art at the time, they provided little help in fighting a fully engulfed fire. A fire truck would be needed for those situations.

There were problems with purchasing a truck. Where to house the truck was a major question. A big, old, unused barn adjacent to the Harmony Hotel, across from the Brown and Staples store, was leased for three-years to become the firehouse. It required some renovations, such as widening the entrance, strengthening the floor, and adding a kitchen.

An old, unused barn was the first firehouse in Harmony (1926)

The other big problem was how to get the money to purchase the truck. An auction of a horse and mule named “Maggie” was a big event. So big that the Providence Journal covered the story. Maggie eventually sold for $112.30, just about enough for a down payment on the truck.

Because money was tight the process of purchasing a fire truck was challenging. Eventually the Combination Ladder Company agreed to sell us a truck for $480 and another $430 was spent on hose. The new Reo truck had a four-cylinder engine, three hundred GPM pump, eighty-gallon booster tank, ladders and other equipment. Now the Association was a true fire department.

Now that everything was in place the first officers were elected to the department. They were Harry Staples, Chief; Byron Winsor, Asst. Chief; Austin Corbin, Captain; and Earl Farnum, Lieutenant. Raymond Lewis, William Tucker, Everett Thompson and Harold Cole were named drivers.

The next step in becoming a functional department was to organize a method to report a fire and alert the firefighters to respond. It was agreed that all fires would be called in to the Brown and Staples store, where Chief Staples worked. Two sirens were purchased and installed, one on the barn and the other at the Laurel Grange. When a fire call came in, Chief Staples would lock the store and go to the barn. There he would activate the sirens a set number of times. This pattern let the firefighters know which part of the village the fire was in.

Part 3 – Paying Off Loans and Purchasing The Barn
Shortly after their second year in existence, the department had paid off the Reo pumper and purchased and renovated the barn that served as the station. They also purchased additional hose and fire extinguishers, along with two sirens.

Things were going well for the Association. They expanded into property owners when they purchased the Harmony Hotel in 1927. This building was converted into a library, which opened on May 13, 1929. Books were contributed by the Edgewood Library, as well as purchased with a two-dollar monthly contribution by the Fire Department.

An addition was added to the building in 1931 to house the Reo and other fire fighting equipment. Once it was completed the old barn was razed and former motel rooms were reconfigured to form a spacious dining room and kitchen. This turned the building into a local gathering place, where food and dancing were a regular event. These events included the traditional Ham and Bean suppers, which help raise money for the department.

Some of the money was used to purchase a 1933 dump truck, which was converted into a homemade fire truck with a 275-gallon domestic oil storage tank serving as the water tank. Although subject of many jokes about its looks, the truck served the main purpose to the department, supplying plenty of water to fight fires.

Part 4 – The War Takes Many Firefighters Away
World War II took many Americans away from their home towns. Some of them were firefighters, including twenty-two members of our department.

This left Chief Staples strapped for coverage. On some fires only three firefighters could respond. It was so bad that the Chief worked out an agreement with the eighth-grade school teacher to let the boys leave school, which was across the street from the station, and jump on the truck going to the fire.

One of the biggest fires destroyed the Rustic Farm, formerly known as Twin Elms. This was where the first Ham and Bean suppers and Fireman’s Balls were held. It was a devastating blow to the town and department.

But there were some good times in 1942. Ted Garnett, owner of the Foster Diner, came up with a plan to raise enough money to pay off the mortgage on the station. He told the firefighters to collect as many clams and quahogs as they could from Narragansett Bay. They came back with bushels of them, and Garnett held a huge Clam Bake. Sure enough, he raised the money needed and the mortgage was paid within days.

Part 5 – Farewell Department, Hello Fire District
In 1946 the department made three big moves. First, it purchased a new 600 gallon Chevrolet pumper, which replaced the 1926 Reo. Second, the decision was made to construct a new fire station. And third, it put on the ballot a referendum that, if passed by the voters, would create a fire district. The vote did pass and the Harmony Fire District was born.

Now that the Harmony Fire Department and Improvement Association was defunct their assets were deeded to the new district. This included all the equipment and land, which included the old station and hotel. Also affected were the fundraisers that used to be the sole means of income for the Association. Now that income was generated by taxes, most of these events were eliminated.

Ground was broken in 1948 for the new station at a cost of $19,000. Part of the agreement made by the Association with the new District was the donation of $4,000 towards a new station. The stipulation was that the building include a kitchen and room for the Harmony Library Association. When the station was completed approximately 3,500 books had a new home. This left no need for the old hotel and barn, which were eventually demolished.

One of the biggest needs for the District was a rescue squad. In 1951 a Navy surplus truck was purchased for this purpose. It required some modifications to meet the needs of the squad and the membership performed the work themselves. In a short time the money was raised to outfit the truck and Harmony had its first rescue vehicle.

Another truck was purchased in 1952. This was a new Seagraves tanker-pumper. This truck was state-of-the-art, with a conventional volume pump and a high-pressure fog pump. As of today this truck is still officially in service, although its main function is for shows and parades.

This brings us to the present. The philosophy of the District Board has been to provide the department with the latest technology, equipment, and training needed to operate in today’s world. But we’ll always remember where we came from. And, after reading all five parts of our history, now you can remember, too. 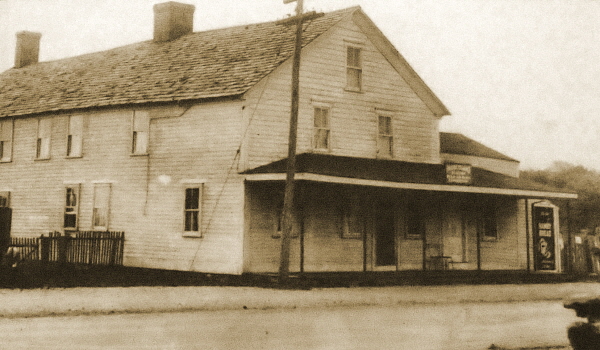 The adjacent Harmony Hotel was purchased in 1927 and eventually replaced the barn. 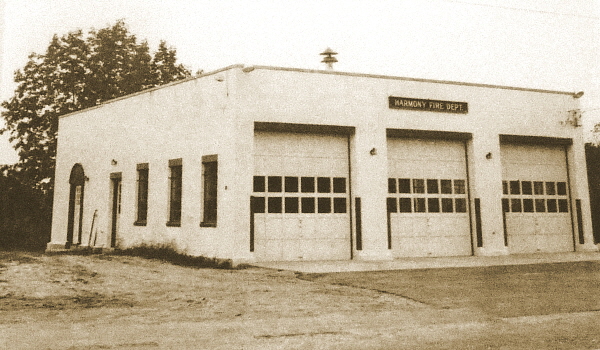 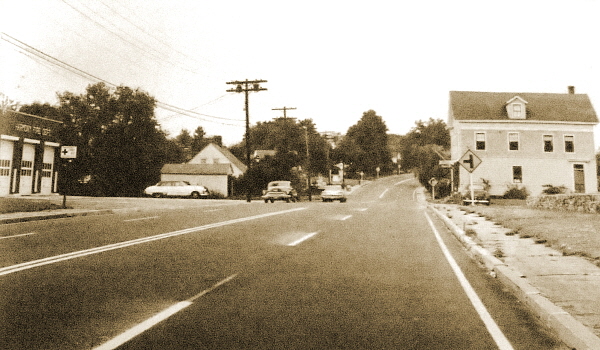 Looking west on Putnam Pike, with the new firehouse on left (1959) 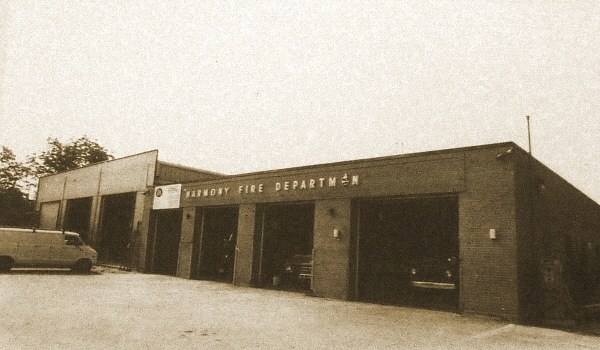 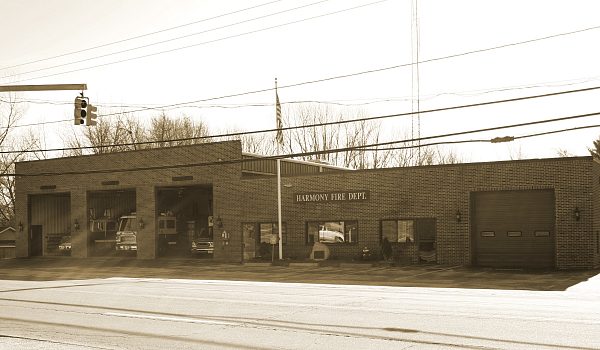 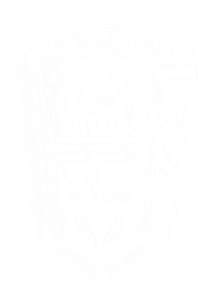 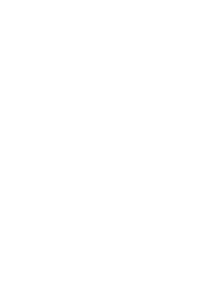